It all started with a whisper from the Holy Spirit.

Since January of this year, Gudelia Guerra, a Consecrated Woman of Regnum Christi, and part of the Regnum Christi Young Women’s section team in Manila in the Philippines, had been feeling the call from God to use her social media platform as a way to reach out to and offer formation to those she serves. In response to this call, she began to produce small, bite-sized reflections on her Instagram Stories, and the feedback was so overwhelmingly positive, that a larger initiative started to take shape. 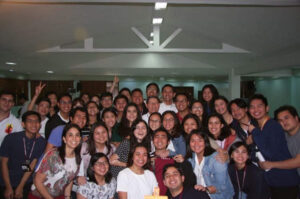 “Gudelia is in charge of a lot of the young women, so this is a great way for her to connect with them,” says Anna “Buding” Aquino-Dee, who is the Communications Head for Regnum Christi in the Philippines. “She showed some of the episodes to me and I thought that she was such a natural, so along with the social media team which I head, we just decided to produce a show.” That show is “Anything Gude,” (a play-on-words with Gudelia’s nickname, “Gude”) and is a series of twenty-minute live videos on Facebook and Instagram; in each weekly episode, Gudelia presents an aspect of the Catholic faith in a fresh and relatable way, and discusses how that relates to every day life. “Aside from giving you information, it’s something that you can look forward to regularly and even have some sort of entertainment while you’re being educated,” says Buding. “So it was really such a spirit-filled and very creative initiative.”

The weekly show fulfilled another crucial purpose for the Regnum Christi communications team in the Philippines; at a time of nation-wide physical isolation due to the COVID-19 pandemic, they needed a way to stay in touch with their members. “It was an organic development born out of the current situation of everyone being in quarantine, stuck at home, and the only way we could really connect was online,” says Buding. “It was an organic development and it’s because we wanted to keep connected.”

Social media turned out to be the perfect platform to maintain that connection with the Regnum Christi youth, and produce something both meaningful and engaging. “During this pandemic that has kept most of us home, a lot have been more active on social media,” says Annina Nakpil, who heads the social media department for the Regnum Christi Philippines communication team. “It has become a beautiful and relevant means for communicating the Gospel, especially with the younger, more tech-savvy generations.” 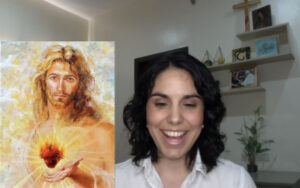 In fact, Buding calls their social media department, which was formed in response to the sudden physical isolation that occurred, “one of the tangible fruits of the quarantine.” “During this time when we’re called to isolate ourselves, we do what’s countercultural out of love for each other and the community,” explains Buding. “Instead of isolating ourselves, we really started uniting instead – I thought that was a really beautiful thing that has happened in the past few months.”

Kitchie Piñgol, a member of the communications team for Regnum Christi Philippines, agrees: “It’s a great platform to reach an audience who are interested in social media. It’s giving them interesting, relevant, and reflective content amidst the worldly data we commonly receive from social media. It’s like a delicious and healthy salad in the middle of a pile of junk food.”

The live aspect of the weekly series has turned out to be one of the most valuable features of “Anything Gude”; although the videos remain available to watch on Facebook and Instagram after the show is over, it’s the live rapport that Gudelia has with her audience that makes the show so special. “I was blessed by the way Gudelia would acknowledge the people who were joining in,” says Buding. “For me, these were such precious moments, when these people felt that they were affirmed – ‘I can see you and we’re doing this together’. These moments are edifying and evangelizing as well.” In order to enhance this sense of community, “Anything Gude” is broken up into four parts: Gudelia provides three reflections on the art work in focus, but in the fourth part, she makes space for conversation and reactions from those participating live. “I think this is very creative – despite it being digital, there is still this collaboration between Gudelia and her audience, and it can only happen live,” says Buding. “That’s why the people keep coming back – because they find a familiar friend in Gudelia.”

The response from the Regnum Christi community – in the Philippines and around the world – has been enormously encouraging, but for Gudelia, the fruits of “Anything Gude” are personal. “It has deepened my prayer life,” says Gudelia. “What I share in the show is the product of my prayer. Every time I prepare an episode, it helps me so much, and it brings so much excitement to be able to share it.

Besides giving her a platform through which to channel her desire to answer God’s call to connect with people in social media in a fun and engaging way, the show has reconnected her to many people with whom, over the years, she had lost touch. “This show has brought me back together with people that I have not been able to see face to face in a very long time, and that I miss so much. As weeks pass by, I receive more and more messages from people of how they have been helped by ‘Anything Gude.’”

For the Regnum Christi Philippines communication team, the process of producing “Anything Gude” has opened their eyes to a new and exciting platform of evangelization, and how they can further use social media to provide formation, meaningful entertainment, and a means of connection for their members. “For me, it made me reflect that being online is not a barrier for human connection and personal connection,” says Buding. “We can think it’s limiting, but really, it’s another way in which we could get into the hearts of the people.” Gudelia, herself, agrees: “It has helped me to help others discover that God is very much present in social media, that they can choose to use it as a source of encounter with God and personal growth.”

And to the question of whether Regnum Christi Philippines has any plans for future initiatives, Buding’s reply is definitive: “loads and tons.” The communications team has plans for future shows and podcasts, and are particularly interested in involving other lay people and religious men and women, and finding ways to stay connected to their members during the current Ordinary Time. “I think the new direction that God is calling us to is really to be creative and reach out and use social media and the Internet as a platform,” says Buding. “We’ll just allow ourselves to be made instruments – the Lord can work through anyone, so we’re really blessed to be able to serve in this spiritual family.”

Gudelia is currently taking a Certified Program of Evangelization with Catholic Link Academy, to hone her skills for her current and future projects. Besides offering “Anything Gude” every Thursday, she also posts short videos on her Instagram account every Sunday, talking about how to see everyday events through God’s eyes. “These two projects have taught me to be more attentive to God’s action around me,” says Gudelia. “So I’ll definitely be open to whatever He wants.” She’s particularly excited about a new initiative she’s been inspired to start: a live show called “Around the World with Regnum Christi” whose goal will be to help Regnum Christi members connect with and find out about other RC communities in localities across the globe.

You can catch “Anything Gude” at 5am EDT on Facebook at Regnum Christi Philippines, or on Instagram @gudeguerra. The show’s first six-episode season focused on the resurrection in art, and in the current season, Gudelia discusses the Sacred Heart of Jesus during the month of June.