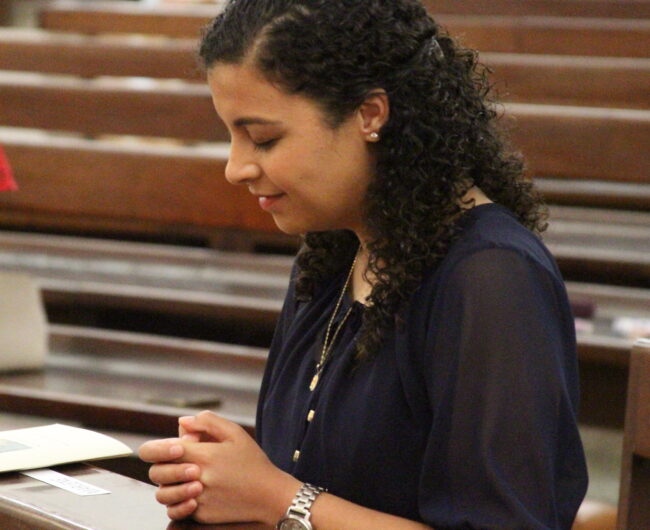 On Saturday, August 22, Marlene Torres Espinoza consecrated her life to God, making her first temporary vows in the Society of Apostolic Life of the Consecrated Women of Regnum Christi, after two years of candidacy.

The ceremony took place in the chapel of the Consecrated Women’s formation center of Monterrey, Mexico, and was presided over by Fr. Paul Lara, LC, territorial director of the Legionaries of Christ of Monterrey; Fr. Arturo Guzmán, LC, and Fr. Ignacio Buisán, LC, the chaplain of the candidacy, participated in the Eucharistic celebration.

Carmen Ramírez, territorial director of the Consecrated Women of Regnum Christi of Monterrey, received Marlene’s vows. Marlene consecrated herself to the love of Christ and dedicated her life totally and exclusively to Him and to the proclamation of His Kingdom.

During the homily, Fr. Ignacio said to Marlene: “After two years as a candidate you are taking this step that God is inviting you to take, which is undoubtedly a step of faith, but most of all a step of love. It is a love that seeks to be sustained by Love, and that desires to abandon itself to the constant tender and faithful love of God, because this love is our security.”

He continued, “The prophet Hosea, however, speaks of the unfaithful wife, whom He leads to the desert to speak to her heart. It sounds harsh that the wife is unfaithful, but it is very realistic; because our love does not stop being a fragile, fearful, hesitant, doubtful love And yet He says to you: ‘I will espouse you to me’. He takes you to the desert which could be a good analogy for your candidacy. Four enthusiastic candidates started two years ago, each with their own characteristics. You have had to walk a good part of the way alone: in the desert. You were the representative of the second-year candidates. However, God has spoken to your heart during these years because that is why the spouse was taken to the desert: to speak to her heart: through the spiritual exercises retreat, classes, days of retreat, triduums, spiritual directions, apostolic experiences, through sister candidates and formators, He has taken you to the desert to speak to your heart and, it seems that He has convinced you.

“The step you are now taking is not random. It is a step that at some point your heart had already taken, in a way you are doing publicly and solemnly what you had surely already done in secret, which is in the realm of God’s faithfulness”.

Finally he said: “God has set his eyes on you, He has invited you to a life of consecration to do great things, to love your family even more, your sisters in community, your brothers  who are consecrated in the Legion and in Regnum Christi, and so many people that God is going to put on your path so that you can present them to the Lord”.

At the end of the ceremony Marlene offered the Blessed Virgin a bouquet of flowers entrusting her consecration into the hands of Mary.

Marlene Torres Espinoza, was born in Michoacán, Mexico, on December 8, 1990. She was a member of ECYD, and a Regnum Christi Missionary in Acapulco and Morelia, Mexico. She studied Psychology at the Universidad Anahuac Mexico, South Campus. She completed her candidacy in Monterrey, N.L. and will now carry out her apostolate at Himalaya International School Monterrey, as a High School Formation Instructor.